What They Don’t Tell You About Anxiety

When “demons” are depicted in scripts or drawings, they tend to follow the same trope. You’ve got your protagonist, seemingly fine, walking along, and following her, there are these entities. Sometimes these are actually drawn beings to personalize the “demons”, sometimes they are simply words trailing the protagonist. Things that sometimes don’t reach the ears, but sometimes catch up, and take hold.

This image is incorrect (for me). Anxiety can be far trickier than this. While I understand the benefits of drawing it like this, since it indicates the anxiety is not you but instead something that hinders you,  in reality it’s not a physical entity (even an imaginary one.) It’s not even a voice. It’s not words. God, that it were words. I can beat the shit out of words. I do words. But no. For me, anyway, it’s not messages following me around only to jump onto my back from behind a tree at random points.

It is inside of me. It is feelings. It has no drawable, relatable comparison. Which is  interesting because you cannot conquer something like that. Which leads to anxiety about anxiety. Awesome.

It’s taken me a very long time to even accept that I have anxiety. Since it doesn’t seem to me like a voice or demon following me around, but instead seems like, well, me, I’ve been very strict my whole life about kicking its ass. About kicking my own ass. When I feel like this, I don’t shut down. I run harder. Because I hate weakness, and this is weak.  (Keep in mind, this is before I knew what it was.) To me, it didn’t seem like something affecting me, like something paralyzing me. It felt like me doing that to myself. And fuck that, I am stronger than that. I ignore my stupid-ass self, because, no. I just will not give in to this fucking nonsense. So that I never look like this:

…because I just tell myself to shut up. And if you can just tell yourself to shut up and continue to function normally, even though (and the bottom panel is pretty spot on) there is some shit literally vomiting on your head, then you can’t have anxiety, right? I mean, look at how much I do in a day? I do so much. There is a reason. If I’m still moving, I won’t stop. If I stop, those feelings, that me, myself, those nerves welling up in my chest like a volcano of I-don’t-even-know-what-the-fuck-it-is because I’m too afraid to stop and listen to it, well, they’ll all get bigger, and harder, and seem important. To me, the only thing to do is to continue to tell yourself these feelings are bullshit and not important.

And that works for a little while. Until you throw up. Until you get migraines so unbearable strong that even you, the girl who stops for nothing, cannot move. Until you lose who you are entirely, and are just surrounded by dark.

So, perhaps, then, not the best solution…

And sometimes, in a twist so unfair it can make you cry, your children inherit this bullshit you’ve never given any thought to, and never tried to straighten out because you’re just so strong, guys. Look. No problem here.
I have a daughter who is pretty anxious. And I’m giving her my coping mechanisms. My shitty-beyond-belief, non-working, coping mechanisms. And I’m angry. And I’m scared. I’m angry at myself for giving this to her, even though I had no control over it. I feel like it is my fault. I’m so angry, it’s hard to explain. It’s just like one more hugely important way I failed. And this time, I didn’t fail me. I failed my child. Just by having a genetic code. How’s that one for you? I’m scared because I don’t know how to handle it. I want to make it go away, but I don’t want to be cruel to my child the way I’m cruel to myself. I don’t want to teach her to be cruel to herself, either. And yet, it’s already started.
It’s already started because I do not know what else to do. These things just fall out of my mouth because it is the way of the world, the way of me, and my kid is only five, and Jesus, what am I going to do?
In this comic, I am the squirrel. She is the bird. 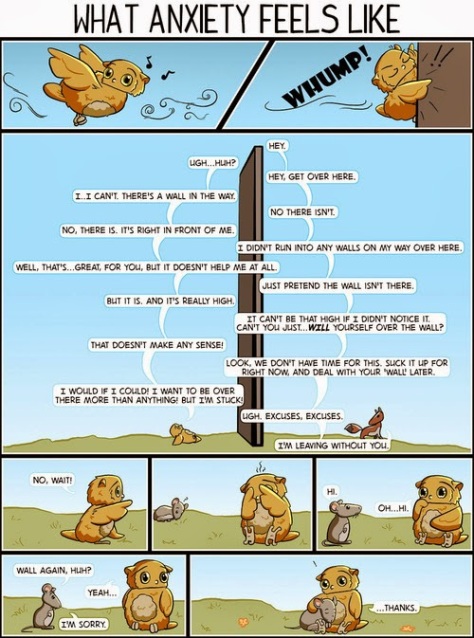 “We don’t have time for this. Suck it up for right now, and deal with your wall later.”

That’s fine when I’m talking to myself. I either take a bulldozer to the damn wall, or push it aside “for later” then never come back to it, until it comes up my esophagus in a fit of physical rage over not being dealt with. No biggie. It is what it is.

But, I mean, just this morning, my daughter was having trouble leaving the house for our walk to school. She’d either imagined or actually seen a spider blocking her path, and couldn’t move. She tried to tell me about the spider. My response? “We don’t have time for this. There is no spider, and if there is, it’s not going to bother us. LET’S GO, ALREADY.” And I pushed her along out the door, and she cried for the first part of our walk.

So, way to go, mom. Awesome job. We got to school on time (barely), but at what cost? And how often do I tell her to ignore her anxieties or that her thoughts are not important? Do I realize them all? Probably not. I’m basically ruining my own child every minute of the day.

Do you see those “demons” in the above paragraphs? They’re not voices following me around. They are feelings without names, worries without cause. And they’re not vocal. I can’t hear them as if they are talking to me. They are me. It just is what it is what it is. This is reality, not something from which you could run, You can’t detach it, or stop it. Because if you stopped it, you would stop life. This is life.

Another wonderful part of this is that I am on high alert all the time. You know how when something really intense is happening and your fight-or-flight kicks in? That’s me from the second I wake up to the second I fall asleep. This made me a great fit for the newsroom. Do you have any idea how nervous news producers are? I looked like a beacon of calm. Or at the very least, I looked normal. And since there was ostensibly a reason for this stress (you’re live in five minutes, your show is 2.5 minutes over, half your video isn’t cut and your sat shot isn’t up yet). In the newsroom, you don’t have to explain why you’re so intense. And even in real life, people seem to understand that deadline work requires a certain ethic and they respect your quirks due to that. In essence, the way you are is validated. Not so much as a stay at home mom. Without the reasonto be nervous, you lose your base. It becomes something you need to think about because it doesn’t fit your lifestyle.

And being constantly on high alert frays your nerves and patience. My reactions are too strong for real life. So that when I interact with my children, I come on too strong. And the anxious one? She is so sensitive and perceptive, she can pick up on cues I don’t even know I’m giving off. It’s a horrid cycle.

I combat this by controlling everything I do, packing everything in, being as efficient as possible. I keep thinking maybe if I could succeed at something, anything, maybe then I could calm down, get off my own back. But, unfortunately, I’m learning that’s not how this works.

Very dishearteningly, I came across this:

If that’s true, I’m in a lot of trouble. Controlling the world had been one of my main coping mechanisms.

One final thing, thinking about this, trying to fix it, makes it worse (hopefully in the short term?!). I’m only allowing this analysis because of my child. I want better for her.

Parent of twins, blogger, writer and journalist. I write things. Sometimes people even read them.
View all posts by parentwin →
This entry was posted in Uncategorized and tagged anxiety, anxiety disorder, depression, parenting, self help. Bookmark the permalink.