(HINT BEFORE YOU START THE QUIZ. ALL “A MOTHERS” ARE ME).

1) A mother is sweeping the floor and collects a good pile of dust and dirt in the center. Her child notices a single green bead amid the refuse, and requests that the mother not throw it away. The mother acquiesces, requesting the child put the bead back in its box with the others, since she loves it so much.

Given this information, how many beads are left on the floor?

2) A mother gives herself one goal that day: do not consume any candy. In the house she has six mini Hershey Bars and a bag of red-hot Valentine’s Hearts. Throughout the day, she eats a good breakfast, taco salad for lunch, and drinks plenty of water both before and after she goes to the gym. She has a dinner of roasted chicken and potatoes, and a cheese/avocado/tomato salad. How much candy has she consumed?

a) None
b) One mini Hersheys as a treat for doing so well
c) Some of the red hot Valentine’s Hearts because they’re tiny and have no fat anyway.
d) ALL OF THE CANDY BECAUSE IT’S THERE AND IT’S PAST 9 P.M.

4) If one child is running in direction X at 12 miles an hour, and the other child is skipping in the opposite direction at speed T-A, how many hours will the children spend fighting before bed? Show your work.

5) By the time a mother’s kids are aged five, how many fucks does she have left to give? 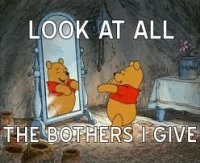 f) all of the above

1) c. Child picks up bead, goes to put it in the bead box, can’t get the box open, and instead of asking, yanks the cover off, spilling every single bead you’ve ever owned onto the floor of your home to be washed away by your tears alone.

2) d. All of the candy. For more information see answer five.

3) b. As soon as “a mother” hits post though, she’s off to remedy the wine situation.

4) The kids have approximately 7 hours to kill before they sleep. They’ll spend two of those eating, two playing, one cleaning up, one watching television, and one whining.

That leaves them SEVEN hours to fight until bed.

The running is irrelevant and not correlated to the fighting.

Parent of twins, blogger, writer and journalist. I write things. Sometimes people even read them.
View all posts by parentwin →
This entry was posted in Uncategorized and tagged children, kids, lol, moms, parenting, quizzes. Bookmark the permalink.