FYI (If You’re a Human Being)

Posted on September 6, 2013 by parentwin

If you’re a parent, you’ve probably by now seen the cocky, controlling, pretty weird letter written by Kim Hall to all teenage girls her teenage boys may ever come into contact with online.

There have already been a number of amazing responses, including my favorite one by Iron Daisy Writes, in which she uses the exact tone and phrasing of the letter to show how this message really sounds, and addresses her letter, instead, to teenage boys.

There’s also this piece by Put Down the Urinal Cake (amazing blog title, by the way), which goes the compassionate, friendly, educational, gentle route, kindly explaining all the things wrong with this piece (and doing well to separate the words from the “scantily clad” pictures of Hall’s boys that she chose to post with her piece shaming girls who don’t wear bras to bed.)

Jezebel also wrote a typical but well done piece taking the letter apart bit by bit so that people could actually see what really was written there.

With all of this writing back and forth, I’ve only got one thing to add.

Letters like the one Mrs. Hall wrote to teenage girls are a prime example of how rape culture perpetuates itself in today’s society in an insidious and innocent-looking way. Let’s start with the small stuff, shall we? The whole letter is a practice in condescension, really, which is something we ought not be teaching either our girls or our boys.

In it, Mrs. Hall writes in a patronizing tone, “Wow — you sure took a lot of selfies in your pajamas this summer!” (Translation – Those are so fucking stupid.) She follows that up with, “I get it – you’re in your room, so you’re heading to bed, right? But then I can’t help but notice the red carpet pose, the extra-arched back, and the sultry pout.” (Translation: You little whore, I know all about you.)

I mean, sure, maybe Mrs. Hall is not saying what’s in the translations, but you can see how one might read her words in such a manner. The all-knowing adult half-playing along with a child’s game all while accusing her of a siren-like power over men.

Which really is two-steps away from victim blaming. Maybe one step away. Sounds an awful lot like, “look at how she’s dressed, she was asking for it,” to me.

It being attention. It being the security she would like to expect from a world that will not accost her, assault her or harass her for being…her.

Because she’s learning. She just got this new body, her whole life is changing, she doesn’t quite yet know what it all means, but she likes attention, she likes being pretty, she likes exploring who she may eventually become. And that isn’t wrong.

And your boys paying attention to that isn’t wrong, either. They are growing, too. This is a natural step in the boy-girl process and rather than shield your poor, innocent sons from the brazen, wanton come-on of the duck-face pose, perhaps you could empower your boys, use those creepy, family-stalking-the-Facebook moments to instill in them the notion that they can be attracted to a girl or woman, and they can still treat her with respect and obey certain boundaries.

A statement like this: “Did you know that once a male sees you in a state of undress, he can’t ever un-see it?” is not only false, it’s harmful.

First of all, I’ve never been a young teenage boy, but I’m guessing neither have you, and before I hop on the “it cannot be unseen” train, I’d like to see some researched citation that this is a fact. Because, otherwise, how would husbands talk to wives? More to the point, how could your boys even stand themselves at the beach (where they clearly are a lot, based on your photos) with bikini-clad women flouncing about? If your line of thought does happen to be true for your boys, I think you might want to consider forbidding them to go to the beach, or swimming, or dancing. May as well cut out that devil pop music, too. And television. All of it. Actually, the Internet, too. Why are your boys even on Facebook? It’s too dangerous, ma’am. They cannot un-see.

As an interesting sidenote when you ask this patronizing question,”You don’t want the Hall boys to only think of you in this sexual way, do you?” you totally already know the answer. And that answer is yes.

And this is not a bad thing. They are learning.

Think of it like training wheels on a bike. Only instead of these harmless photos being training for these girls’ eventual fall into sin, think of them as training for your sons on how to be upright human beings and treat all the people in their lives with the respect they deserve simply for being people.

Finally, as a parent of five-year-old girls, and as a former 14-year-old girl, I would like to ask you politely to step off. It’s not your place to parent other people’s teenagers, and shaming other parents into pruding up their daughters is simply not a long-term solution to the “impurity” in this world. It’s like abstinence-only education. (Look it up for its mind-boggling success rates.) If your letter actually does what you’d hoped it would do, all you are doing is taking the training wheels off the bike of life. So that when these girls hit their late teens and twenties, their own parents haven’t been able to have the wholesome, respectful talks about sex and image they would have otherwise had, because they’re all too busy setting up concrete walls around their daughters and burning any offensive clothing. (I’d like to see someone burn the absence of a bra, actually. Can we make that happen?)

All I know is that my mom didn’t need someone like you telling her passive-aggressively what a little slut I was because I snuck short skirts into school. She was handling it. Appropriately and individually, and through her kind, loving guidance, I was able to figure life out. Thank God it was her and not you.

The parents of those Facebook girls are handling it. Kindly step off.

Oh, and just because I feel like this post needs a totally inappropriate picture to offset its points, here’s a toddler making her first duckface, for your time. Try not to let your boys see it. I don’t want them to have to picture my daughter as a two year old with that silly look on her face for the rest of their lives. 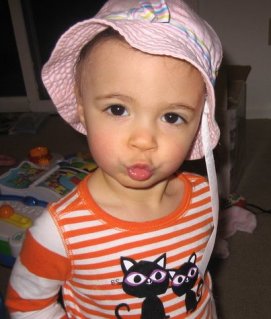 5 Responses to FYI (If You’re a Human Being)