It Takes a Village

My kids love me. They stick by my side. In fact, it’s hard for me to get away, for anyone else to help them, to put on their shoes, to dress them. My kids want me.

What an ego boost. What a pain in the rear. And why? Why do children in this day and age and location cling to their mothers so?

But second, and very importantly, because there’s no one else around.

We live in a very isolated world right now. All the playdates in the world don’t make up for the fact that mom is still there, is the only one the children will turn to for help or conversation. Mom is their first choice because throughout their day, mom is the one caring for them, rearing them. And even if she has a vast support system of family and friends about, it’s still not the same as it was.

Back when it took a village.

My husband was born on the Azorian Island Terceira. It takes about two hours to drive around the whole thing. In his village, everyone knew everyone. The man who brought the milk would tell his customers about the bundle of joy who’d been delivered to the family down the street, and those customers would let him know about the death of the two chickens on the farm up the way.

If your child ran out into the neighborhood, you let her go. Marcie would handle her, or Osvaldo or Maria. The entire village was like one big nuclear family.

And this system works.

It’s not possible, given our cities and streets and crime and strangers. But in that time, in that location, it worked. And it could easily work again. Children are social beings.

This is all brought about by the time we just spent with my mother in law and extended family on my husband’s side. When we first arrived, I was the girls’ go-to for any and everything, as it is in our daily lives. But by day three, they were bopping around from adult to adult with ease. If one of us was boring them, they found someone else to entertain them for a few minutes. 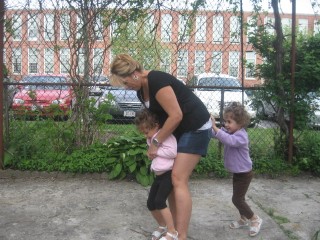 This worked out incredibly well. They were never antsy enough to fuss about, and they never stuck to any one person long enough to annoy them. The parents were happy and had time to themselves, and the kids had all the attention they could ever want, more than  they could ever get from just one person.

They played ball with Uncle Isidro, before blowing balloons with Uncle Rui. Then they gave Aunt Arminda hugs before asking Aunt MaryAnn for yet another soda. 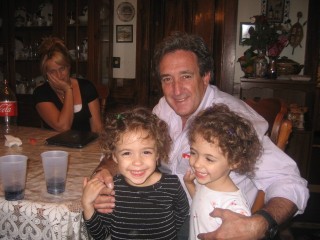 My children would thrive in a village environment, and so would I. Helicopter parents may be a product of necessity. Perhaps it’s not that we’re suddenly more worried about our kids. Perhaps it’s that we’re the only ones who are going to worry about our own, so we have to do the job ourselves. And it’s a big job.