A friend of mine is having twins girls, due in August. She asked me for advice, and I had to reach far back into my foggy, sleepless memory banks to give her anything useful.  I don’t often talk about having twins, and I don’t often talk about the infancy years, but both are so stressful, that maybe a quick tutorial would help some mothers out there.  So, without further ado, here are a few ways to make your life easier, or at least survivable, during the early days.

1) Plan for the worst. Twin pregnancy (especially identical twins, like mine) are automatically in the high risk category, and this is for a reason. I’m not going to go into all the things that could go wrong because usually they don’t and there’s no need to scare you, but when your doctor schedules you extra tests, go to them. Make time in your schedule for the weekly ultrasounds. Should you have to go on bedrest, truly take it easy. They aren’t joking.  If you have a specific birth plan, try to keep in mind that twins complicates things, so get a doctor you trust to respect your decisions unless there is an absolute emergency.  That way you won’t feel so pressured or nervous during delivery. You’ll be able to trust that your plan will be followed as closely as possible without endangering you or your children.  Prepare for the worst. Know that there is a chance your babies will be born early. If you want to breastfeed, get your pump ready beforehand, in case your children need to stay in the NICU for a time before going home. This way, on the off-chance that things don’t go as you planned, you have the knowledge and the tools to make your life as much to your liking as possible, and you won’t be so overwhelmed that you give into personnel who may not understand your priorities. 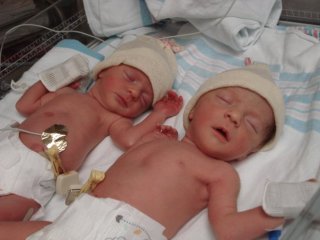 2) When you get home, be flexible. Allow for the possibility that it may take a while for the babies to latch. It may take a while for them to gain weight. It may take them a while to catch up to their peer infants.  None of this is your fault. If you can keep yourself out of the equation and limit your guilt, you’ll be more confident and happy and be able to enjoy your early days a little more.  Having twins is hard.  Give yourself a break. You don’t need to make it harder by blaming yourself when they don’t gain an ounce. 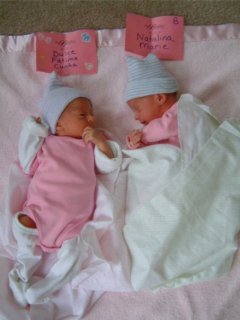 3) Feed them when they are hungry.  Sometimes doctors tell you to feed them every two or three hours.  That’s just not feasible advice for twins, sometimes. They’ll usually be a bit smaller, possibly premature, and they’ll only be able to fit the smallest amount of milk in their tummies at one time. When their bodies use that up, they’ll be hungry again. You might feel like you are spending all day feeding them, one after the other (unless you are more talented than I am and you can feed them both at the same time), but it’s worth it. It only lasts a week or so.  If your child is crying because he or she is hungry, you should feed them. Even if it hasn’t been two hours.  (Actually, I believe this for any baby, not just twins and preemies.) 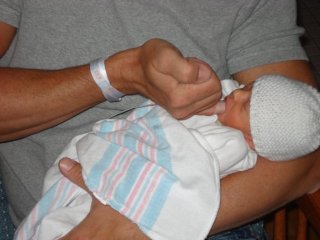 4) Do everything on the same schedule. This is the most important thing I did, and I still reap the benefits today.  Feed them at the same time. If one is hungry, try feeding them both. Put them down for naps and bed at the same time. If one is tired, put them both down. If the one who isn’t tired doesn’t drift off to sleep, spend the quiet time in the room with her while her sister sleeps.  I can’t stress enough how crucial this is. It makes two babies more like one baby. If you put one down for a nap and keep the other up, then put that baby down for a nap while the first sleeps, you’ll have to be on all the time. You’ll exhaust yourself. And if you practice this same schedule thing, three years later, your kids will inherently understand that they nap at the same time, they go to bed at the same time and they eat their meals at the same time. No one feels like they’re getting special treatment. 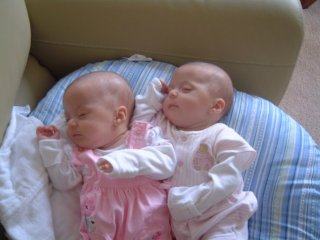 5) If you are unsure of something, call. Put your mind at ease. Don’t do it all by yourself.  They have on-call doctors and home care for a reason. Your kid isn’t gaining weight? Call. They’re throwing up too much in your opinion? Call. They haven’t pooped in a week? Call.  They have a yellowish tint to their skin? Call.  For all of these concerns, the answer will most likely be, “everything is fine,” but why take my word for it when a medical professional can help ease your mind? That’s what the numbers are there for. You won’t be burdening anyone.

6) Accept help when it’s offered and ask for it when it’s not.  You only have two arms.  Even though you are caring for your infants 24/7, you are still going to need to eat and sleep, regardless of their needs.  You’d be amazed how many people are willing to pitch in and help, especially for the first few weeks. If someone asks if there’s something they can do, DO NOT say nothing. Say, sure! Can you pick me up some fried chicken? Or, you know that killer mac and cheese you make, boy I’d love some. Or, could you just hold the babies for ten minutes while I take a shower?  They’re not offering to be polite, like you think. They’re offering because they want to help. Believe them. Use them. This is so important to your sanity.

Twins present a separate realm of issues and problems that seem never to let up, but are most definitely more pronounced in the first few weeks. How unfortunate that those first few weeks are the ones in which you need to physically recover from birth and learn how to be a twin parent.  Good luck!  You’ll survive, I just know it.

If you enjoy this blog, please vote for Tales of an Unlikely Mother on Babble.com. We’re number 15, just scroll down and click on the thumbs up.

Parent of twins, blogger, writer and journalist. I write things. Sometimes people even read them.
View all posts by parentwin →
This entry was posted in Infants and Babies and tagged babies, birth, children, infants, kids, parenting, pregnancy. Bookmark the permalink.