The First Story of my First Born(s)

Rule number one in life for a sexually active woman? Never take a pregnancy test at work.

It was a chilly January evening when I stepped into the Walgreens on my dinner break. I picked up a frozen pizza, a pint of sherbet,  and a pregnancy test. I was a few days late, nothing to worry about, but my boyfriend had mentioned it, and I figured I’d put his mind at ease.

Back in the newsroom, I popped my pizza in the microwave and headed to the bathroom.

I came out, white faced.

“T?” I popped my head into my friend’s editing bay.

“Oh, my God. Do you have another test? Sometimes those things are faulty.”

Imagine the clerk’s surprised expression when 20 minutes later, I’m back at the counter with my arms full of pregnancy tests.

“A pack of Marlboro Lights, please.” Clearly, I was going to need back up.

I took them all.  The result never changed.  Pregnant.

All I can say is, what a complete waste of a good pizza.

Later that evening, I squared my shoulders and faced my boyfriend, my lip quivering.  “I tried to call you,” I said.

“Well, you know how you were concerned about my period being late?”

He nodded, his eyes clouding over.  “Are you?”

We looked at each other in shocked silence as the minutes ticked by in slow motion.  Just the week before, his brother and his brother’s wife had announced that they were pregnant. “What have we done?!” they shouted in jovial mock fear.  What had we done, indeed?

I stepped into the cold ward at the hospital for an ultrasound to see how far along I was.  I wished the tech would hurry up.  I was going to be late for work.

I was silent as I picked my jaw up off the floor.  “My boyfriend’s going to kill me!” I managed to squeak out before grabbing the sheet and scurrying out of the office.

Taking a seat wasn’t enough for the news I delivered to him that night.  He collapsed, instead, on the bed, staring at the ceiling. 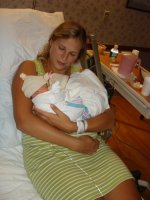 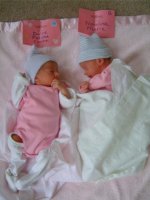 But it wasn’t a boy, it was two identical girls, who we met just six and a half months later.

More than three years since that fateful day, my husband and I are now married. Our family of four is strong and loving.  We couldn’t imagine our lives without them. 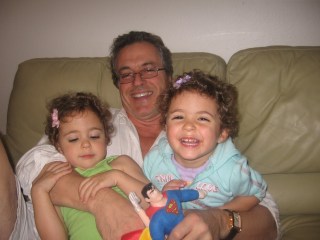 And that is the story of how two little beings changed and bettered the lives of two selfish and carefree adults before they even took their first breath.

Now, I know that’s not the true birth story, for that, you can click here.  I find it absorbingly interesting, of course, but that’s because it’s mine!

___
If you enjoy this blog, please vote for Tales of an Unlikely Mother on Babble.com. We’re number 15, just scroll down and click on the thumbs up.