For the first six months we lived here, we were a one-car family, meaning that if I had to go grocery shopping or do errands, we’d all get up early, pile in the car, drop my husband off at work, and go about our business.  Then we’d go pick him up in the evening.  It was inconvenient, so whenever I could, I avoided it.  We did a lot of walking.

Thankfully, living in Florida, I was able to take them out far into the “colder” months.  Of course, I soon learned that “passing showers” in this state actually meant torrential downpours in which drops the size of buckets will come at you in every direction.  Sometimes, we ended up looking like this: 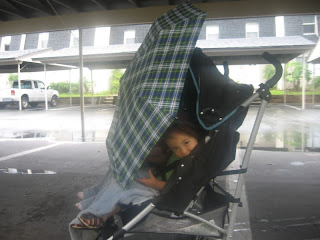 But it was worth it. It got my kids and I out for long periods of time, allowing them to take in the world around them and notice things they wouldn’t have been able to grasp while flying by in a car.  I lost weight (pushing 50 pounds in front of you for two miles a day can do wonders). I had time to myself and time with my kids all in one, as there would be periods of silence when we were all lost in our thoughts, and periods of chatter as I described and explained to them the objects they were seeing on either side.

When we finally got a second car, my life became so much easier.  Suddenly errands that had taken me hours now took mere minutes.  I could strap them in, drive off, and be at the bank in three minutes.  I could be at the library in five. I could get there without tiring myself or becoming overheated.

But, I miss those days of the stroller and the mission. I wouldn’t give up the convenience of the car, but I’ve realized, just because I have a car, doesn’t mean I always have to use it.  It’s gorgeous outside today. There is no reason for us to go from sitting inside the house to sititng inside a car.  I think we’ll walk to the bank today.  It’s not time wasted. We’ll be out in the open air, seeing squirrels and trees and ants as we pass. The babies, if I know them, will have a lot to say about each.

The point of this is to remember that sometimes convenience doesn’t outweigh experience.  Every once in a while, we all should take a hike, if just to recenter and remember ourselves.

___
Please vote for Tales of an Unlikely Mother on Babble.com. We’re number 15, just scroll down and click on the thumbs up.

Parent of twins, blogger, writer and journalist. I write things. Sometimes people even read them.
View all posts by parentwin →
This entry was posted in Getting Out of the House and tagged babies, children, errands, exercise, getting out of the house, kids, parenting, toddlers. Bookmark the permalink.