Posted on September 1, 2010 by parentwin

One of the most startling discoveries I made upon becoming a mom is that parenting is a competitive sport in which there are no winners.  Something as simple and necessary as feeding your child is cause for judgement and snobbery from parents who do it differently.

When my twins were infants, we fed them using bottles.  In public, this garnered a lot of attention.  Were we feeding them formula?  It was scandalous.

The answer, for the first three months, was no.  I was pumping my heart and my breasts out daily to give nourishment to my incredibly tiny children.  Born at 34 weeks, they had little to no ability to latch.  In fact, for the first month, we had to feed them via tube.

Taking a bottle out in public, however, never failed to bring on the stares of other well-meaning parents who were certain our children weren’t getting the best nutrition possible.  On top of everything else a parent has to worry about, we now need to worry about other people judging how and what we feed our children.

After the three-month mark, I went back to work.  I could not continue pumping enough food for them, and so slowly we weaned them to formula.  Am I a formula feeding advocate?  No, not really.  I am a feeding advocate.  As long as mothers are feeding their babies, I am content.

There are many reasons that people might formula feed; necessary medication that doesn’t mix with breastfeeding being one of the biggest.  To me, though, it doesn’t matter if one woman is feeding her infant formula because she couldn’t produce enough breastmilk, and another is doing it because she’s on medication that could be harmful to the baby, and a third is doing it because she doesn’t like the feel of the baby at her breast.  It’s simply not my business.

This isn’t to say we should silence our beliefs.  There is most definitely a role for the lactation consultants and activists out there.  Many mothers are confused about breastfeeding.  Many are coming up against resistance from their families who formula fed.  Many desperately want to breastfeed, but their baby won’t latch, or they’re having trouble with technique.  Infancy is a time of great stress, and many infants face weight issues that would push any mother to follow her doctor’s – her mother’s, her sister’s, anyone’s – advice to start giving formula, lest she hear the dreaded “failure to thrive.”  Those mothers, though, will seek out help.  They will ask you – or their doctor, or their sister, or their mother – to help them learn about breastfeeding, to help them feed their child.  A woman in a restaurant or sitting at a bench in the mall is not asking for our help, and we do not know her story.  Therefore, shouldn’t we reserve our judgement?

I wanted to breastfeed.  I wanted to breastfeed for more than three months.  Once I determined it would be infeasible for me to do so, I did not want other’s opinions on why I should continue to try.  I certainly did not invite the stranger on the street to start waxing poetic about the benefits of breastfeeding to me, as I sat outside at a Starbucks and wrestled with two babies to get bottles into their mouths – especially because in that particular instance, I was feeding them breastmilk.  Yes, it comes in a bottle, too.

And bottle feeders are not the only women who come up against judgement from complete strangers.  Nursing in public has long been an issue for mothers as well as mall-goers.  But isn’t it every mother’s right to feed her child when it is hungry?  Someone’s five year old may need a mall pretzel to keep him on his feet, and nobody will look at him twice, but another woman’s infant needs a snack, and whether she is using bottle or breast, she will get stared at, if not spoken to.

If you feel the urge to judge someone for their choices, I beg you, next time, before you say something to that harried mother, judge me instead.  Think back to this picture: 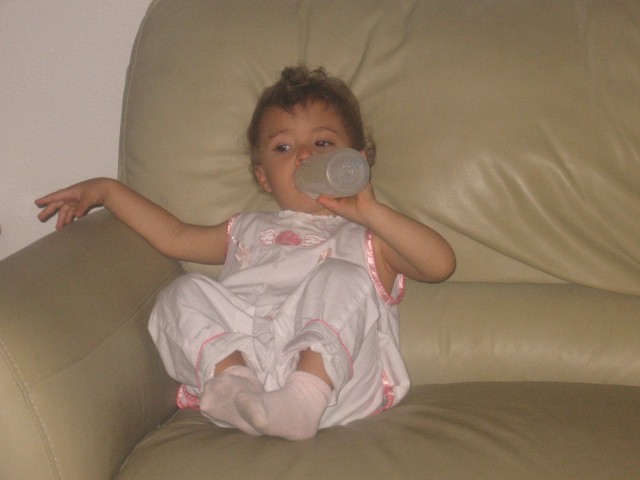 Yes, that’s an almost-two year old with a bottle, and, yes, we’re working on it.  But that’s another blog for another day, and I’d rather you judge me than the poor woman in the corner over there nursing her child, or the mother behind you at the post office when all the fenugreek in the world couldn’t boost her supply.

Parent of twins, blogger, writer and journalist. I write things. Sometimes people even read them.
View all posts by parentwin →
This entry was posted in Infants and Babies and tagged babies, bottle feeding, breastfeeding, formula, infants, parenting. Bookmark the permalink.

5 Responses to Food for Thought